Alex Cooper is everything I hate in a person. She’s fun, blonde, confident, loud, successful, a podcast host, and doesn’t immediately shower after getting off a plane. She’s everything I’m not and wish I was—my inverse psychological classification—and I’m obsessed with her.

“There are two types of people in the world: dumb smart people and smart dumb people,” she says to me as we make our way through LAX airport. “Which one are we?” I ask.

“Smart dumb, obviously,” she replies. A dumb smart person, she goes on to explain, is someone with zero intuition about people but “knows about, like, books, and things.” Smart dumb people, I conclude, are the opposite. We are flying to New York City for the weekend—a plan we made in hopes that, if we flew across the country, there would be no choice but to leave our respective homes. It was meant to be a refreshingly chilly change of scenery from Los Angeles, where we both live. Fall, I’m told by people who live with seasons. It ended up being a frightening 75 degrees and was also, unfortunately, the last weekend in October, known to some as the dreaded “Halloweekend.” Not realizing this until we had already strayed 3,000 miles from our residences, we resigned to yet another weekend of sweatpants and staying in—there was simply no other option. 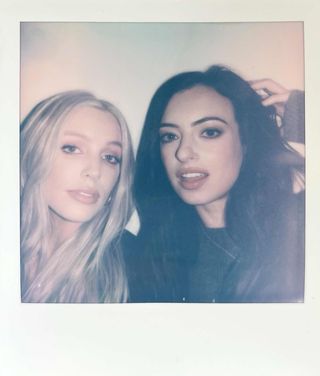 I knew Alex was famous, but it turns out Alex is evidently really famous. Perhaps the only person who has ever reached this level of fame from a podcast, rather than become a celebrity who then decides the world would simply be amiss if they did not start a podcast. Walking through the West Village with Alex was like tailing Elvis: adoring, beautiful women throwing themselves at her left and right, screaming “daddy!” at the top of their lungs. But what I also observed was an unusual kind of fan relationship. Alex and her listeners interact as if they are friends from sleep-away camp. Girls who haven’t seen each other in years and have a lot to catch up on. It took me no less than a dozen of these interactions for me to finally stop asking, “How do you guys know each other?”

Unlike some celebrities who covertly strive for a cultish fandom that blindly follows whatever they do, Alex has managed to create a real community—one where she and her listeners exchange stories, advice, and ideas. She is not selling anything. She will never ask you to spend your hard-earned paycheck on her new hair extension line. Her devoted listeners, a.k.a. “Daddy Gang,” (a moniker Alex coined in the early days of the show, predicting it would make people feel like they were a part of something) aren’t afraid to give her constructive criticism, because she takes it like a champ. In fact, she has been publicly called out on more than one occasion, and while this might cause others (me) to flee the country and assume a new identity, Alex has proven herself to be capable of reflection, and possesses an almost superhuman ability to laugh at herself. She’s real with her audience even in conversation about times she wasn’t being real (wow…BeReal really ruined the word “real”).

In September 2021, a TikTok account attempted to expose her for photoshopping the side of her waist in an Instagram post. After a few days that she describes as “mildly embarrassing,” she responded by releasing an episode aptly titled, “I Got Caught Photoshopping.” She doesn’t pretend to be above the things that we as young women living in the nightmare of modern internet culture get sucked into, but also understands how important it is to talk about them. 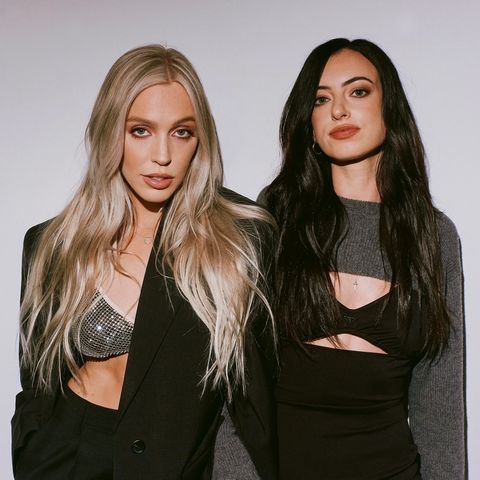 Another weekend of sweatpants and staying in, apart from taking these photos.

According to a report from Demand Sage, as of June 2022, there are over 2.4 million podcasts in the media landscape. Of those, there are probably one million podcasts titled something along the lines of Two Girls, One Glass of Wine, each spewing the same given commentary on dating, like, “Girl, listen, if a guy is toxic, you need to cut him out of your life.” Even though Call Her Daddy’s pure existence was ahead of the podcast curve by almost a decade, Alex’s opinions have never been obvious or shallow. “As much as people say [Call Her Daddy] is polarizing, it was me trying to find a way for women in the world we are living in, where we aren’t just bitching and moaning, complaining about the patriarchy,” she tells me. “Oh, you want the power? Here are a couple tips to gain the power from the inside out.”

This mission statement still serves as a north star for Alex, and is partly the reason the legion of people trying to emulate her ascension doesn’t bother her. “I am my own competition,” she says. “I don’t pay attention to what other people are doing and I don’t consume other people’s content so I can maintain an original voice. When I started, I had never listened to a podcast in my life. I focus on who I am rather than trends and quick hot takes that aren’t going to last.” A quality you have to admire in this day and age where fast-moving trends and endless comparison live on a screen that’s permanently attached to us. 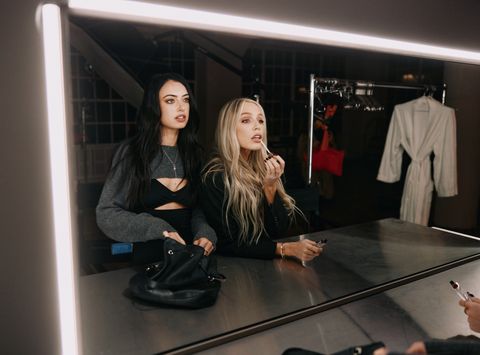 When I started, I had never listened to a podcast in my life.”

What differentiates Call Her Daddy in such an oversaturated market is how deftly Alex traverses such a wide range of topics. She launched season 2 with a tell-all interview with Hailey Bieber, where she dove into salacious tabloid drama from years past. This episode was followed by a human interest piece in North Carolina, interviewing the workers and women who visited A Preferred Women’s Health Center abortion clinic in Charlotte to examine the impact of Roe v. Wade being overturned.

Call Her Daddy has become a safe space for people to explore everything from sex to mental health. Prospective guests practically run to the pod as their first friend to phone after major public turmoil, while Alex patiently listens to their side of the story without judgment—a skill she attributes to growing up with a professional psychologist for a mother. “When I was younger, and still to this day, I will walk into my house and one of my friends will be sitting on my couch speaking to my mother. Growing up, I would get frustrated that she was so intuitive, because she would always know if I was lying. But now I feel so grateful, because it made her there for me and my friends in a way other parents couldn’t be.” Alex herself often approaches the interviews from a psychoanalytic perspective, making the listening experience feel like what one hopes to gain from their own therapy session—that is, if your therapist called you a “hoe” and gave you explicit tips on how to masturbate.

The consistent through line that draws listeners in week-by-week, though, is Alex’s unabashed authenticity. She comes to the mic prepared to serve up her unfiltered opinion and lead a dynamic, no-holds-barred conversation, and with that, she serves up a piece of herself. Her massive audience isn’t here for her celebrity guests or gossip, they are here for her. “One week I’ll have a comedian on, and the next I’ll have someone who talks about their childhood trauma,” she says, throwing a Cheeto into her mouth and promptly wiping her fingers on the hotel bathrobe. “I have a loyal audience that sticks with me even when I switch up my content. I don’t stick with what I know.”

What Alex does seem to know is how to make people laugh. Many of her stories remind me of the Nora Ephron mantra that her mother told her when she was young: “When you slip on a banana peel, people laugh at you. But when you tell people you slipped on a banana peel, it’s your laugh, so you become a hero rather than the victim of the joke.” For Alex, it’s sharing horrors like the time she vomited her dinner on her boyfriend’s cock, or when she went to the hospital in Las Vegas on her birthday due to a kidney infection she contracted from back-to-front sex. You know, classic Nora… 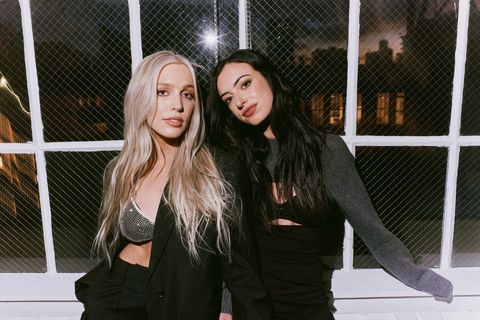 Cohabitating in a single hotel room for three nights is the kind of thing that can make or break a relatively new friendship. Annoying habits are revealed, and questionable moral principles come to the surface. Before leaving L.A., I had asked Alex to put her hood up on the plane if she wasn’t planning on washing her hair before we shared a bed that night. Thankfully, I don’t snore, as she said if I did, she’d “suffocate me with a pillow with zero remorse.” Expecting to find out what shameful quality of mine or hers would lead to the untimely demise of our relationship, I instead acquired a full grasp on how singular the culture of Call Her Daddy truly is, and that if Alex is a smart dumb person, it’s possible she’s the smartest dumb person alive. 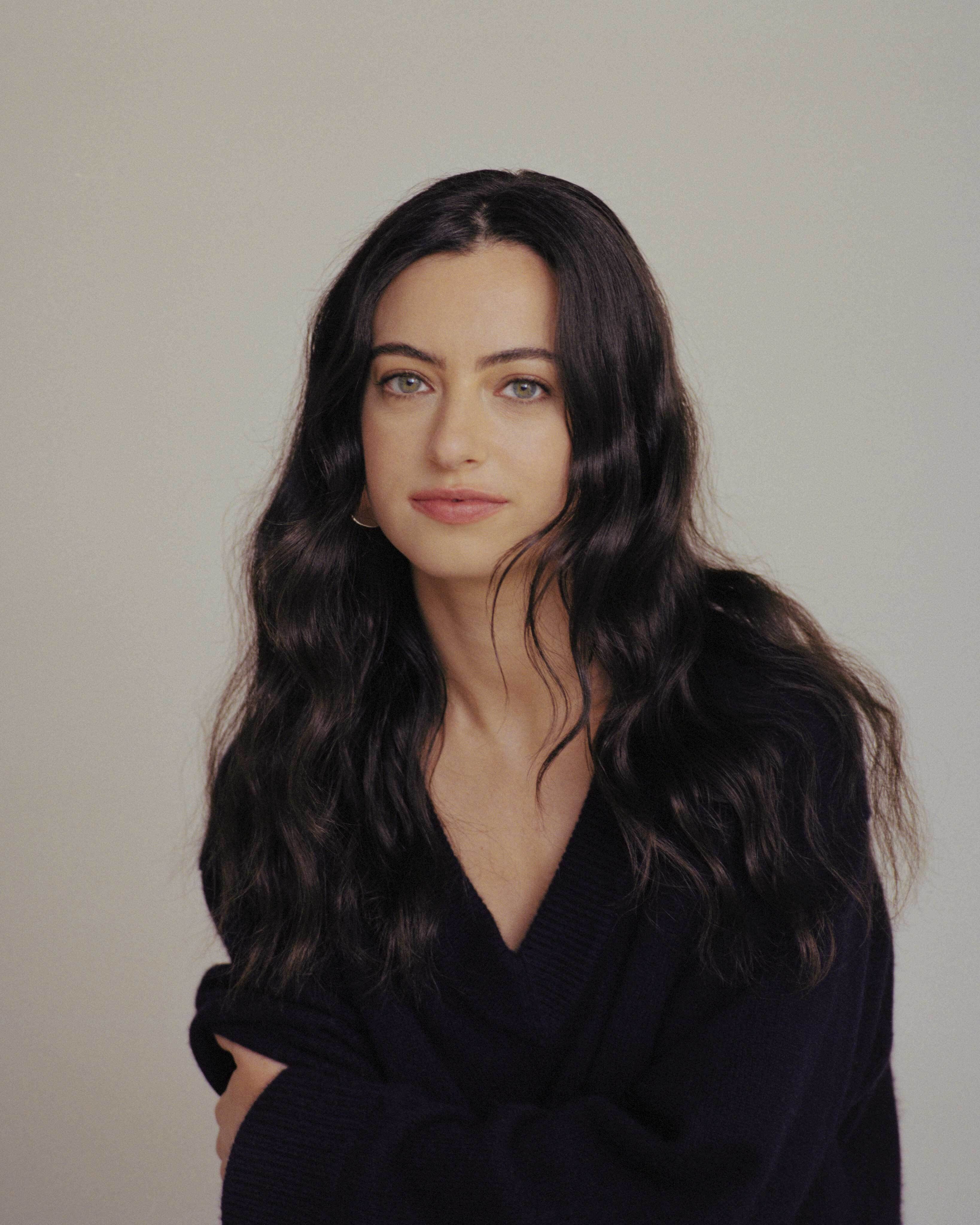