In Nanny, the psychological drama about displacement and resettlement, Anna Diop plays a version of herself. Like Diop, her character, Aisha, emigrated from Dakar, Senegal, and it’s that exploration of identity and belonging that most attracted Diop to Aisha. “I’ve always related to the experience of being alien and learning how to assimilate as a means to survive,” she says. Diop immigrated to America nearly three decades ago, and taking on this role, she says, allowed her to also honor her mother because, through Aisha, she’s able to show the struggles many immigrants bear to build a better life.

In the film, which won the Grand Jury Prize at this year’s Sundance Film Festival and hits theaters today, Diop’s undocumented Aisha is hired to care for the daughter of a wealthy New York City couple, hoping to save enough money to bring the young son she left in Dakar. As his arrival approaches and Nanny progresses, the film injects forceful African folklore spirits, Mami Wata and Anansi, that haunt Aisha’s reality and dreams. Sierra Leonean-American filmmaker, Nikyatu Jusu, uses this to mystically show the threat to the American dream Aisha is trying to attain.

Chatting from the Park Lane hotel over video on a rainy Tuesday during the New York Film Festival, Diop, 34, is dressed in a wide V-neck cream sweater with furry sleeves, her braided hair pulled up in a classy bun. It didn’t take long for us to bond over our African immigrant journeys, especially when she mentioned how much that helped her prepare to play Aisha. “I was so enamored with the fact that I got to play a Senegalese woman because I’ve not had the opportunity to do that before,” she says with a twinkle of gratitude. “Nikyatu was so married to authenticity for this film—she had written the script years ago, but when she decided to cast me, she tweaked the script to fit the nuances of who I am.” Jusu says she did so because she’s “adamant about realistic accents and casting ‘on type’ rather than wedging the wrong actor into a role they don’t inhabit.”

Diop as Aisha in Nanny.

Outside of that tailoring, to prepare for the role, Diop focused on what she calls regular character work, which included writing the biography of Aisha: a single mother longing to be reunited with the son she left back in her home country; struggling to adjust to America in New York City; and battling microaggressions and abuses of power in the workplace. She also did something she’d never done before to prepare: used cork boards. On them, Diop wrote out every scene and color-coded the ones where Aisha is experiencing psychosis—what ends up in the film as horror elements. Then, “I color-coded those against the scenes where I seem to be sane,” she says. Doing this helped her visualize the “ascension of insanity” the character goes through.

Jusu says she was drawn to Diop for the role even before casting because her “humility, talent and beauty stand out to me at a time when so much of our industry is about clout and speed rather than an authentic commitment to the work.” Like Diop, Aisha’s experience is one Jusu drew from within, too, when writing and directing the film. “I grew up in a Sierra Leonean household in Atlanta, a confluence of Black and southern culture mixed with a pervasive Black immigrant presence,” she says. “Mainstream media doesn’t really reflect the ways Black immigrants and Black Americans inherently intersect and interact in real life.”

Throughout Nanny, Jusu explores those relationships alongside themes of colonialism and tradition. From the music and Ankara clothing to the displays of ceebu jën, a traditional Senegalese rice dish, such explicit representations of West Africa allowed Diop to further celebrate her culture. “Nikyatu would tease me because I was constantly pressing her to incorporate Senegalese nuances,” Diop recalls. “And luckily, she was like, ‘Boy, you love your culture, man. You just won’t let up on this.’” Diop even hired a dialect and accent coach to work with her and her cast mates so that they perfected the Senegalese dialect and native language, Wolof. “I wanted it to be done right,” she says. “Everywhere I could, I was putting in little Senegalese.”

Diop’s journey to this first lead role in a feature film hasn’t been without struggle. It began with moving to Houston, Texas, from Senegal in 1994. “It was very lonely,” she recalls. She was surrounded by her relatives in Senegal, but once in America, it was just her, her mom, and her dad, whom she had just met because they’d been “separated across oceans until I was five.” She begged her mother to take her back because “assimilation and learning this new place and developing your own ways of surviving” was challenging and confusing. 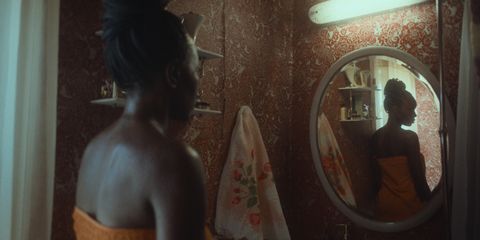 At home, her mom would cook Senegalese food, and her parents spoke Wolof. They were raising “me as a Senegalese person with Senegalese values in the religion and expectations of Senegalese girls and women,” she says, remembering still. “I’d go out into the world, and it looks different, sounds different [with] different expectations [and] different things going on.” As Diop adjusted, she relied on the immigrant community in Houston for refuge. “The people I connected most to were other immigrants, no matter what their race was because we both shared a dual existence…We both went home and had one culture and then went out into the world and had to be in this [other] culture,” she says. “I had a lot of Indian friends growing up. One of my best friends is Vietnamese. But similar to me, they all either were first generation or came [to the U.S.] when they were very young, too. So that’s how I survived.”

She first fell in love with acting at 12 when she stumbled on a screenplay written by a family friend. It was her first time reading one. The fictional world, plus the characters and dialogue, fascinated her. “It’s kind of cliché,” she says, laughing lightly, but “I caught the acting bug and got my parents to enroll me in a theater group in Houston.” Not long after that, she joined the theater troupe at school and became “a theater dork” until she graduated high school and moved to Los Angeles by herself to pursue acting full-time.

She took acting classes in L.A., studied Shakespeare at Oxford one summer, then moved to New York City to study some more under renowned coaches. “I never wanted another actor to know something about acting that I didn’t know,” she says of her hustle. “Whether it was technique, whether it’s a book they read, anything.” Diop was “very determined to make it work.” She credits the audacity of youthful hope for the progress she’s had in the industry. “I don’t know that I would ever have been successful if I didn’t start when I was 17.” She met her agent in one of those acting classes and inched into the industry through commercial and modeling work.

“The people I connected most to were other immigrants, no matter what their race was because we both shared a dual existence”

That meant lots of appointments and auditions—and rejections. In one meeting, Diop recalls a high-profile manager, a white man, telling her, “‘Your skin is too deep, you’re too dark to really work. You’re not going to find consistent work. It’s just not going to be the reality.’” At the time, Diop says, being a dark-skinned woman wasn’t “in” until Lupita Nyong’o won her Oscar in 2013, “and she blew so many doors open.” Nyong’o’s rise became pivotal in how dark-skinned women like Diop were received in an industry long infested with racism, sexism, and colorism, especially for women of color.

By 25, Diop had a breakthrough role as a series regular on the short-lived The Messengers, which first aired on the CW in 2015. Before booking the series, Diop’s casting character description asked for a “Lupita Nyong’o, a young Viola Davis type… They were saying that because of the success of Lupita,” Diop recalls. “She was brilliant in [12 Years a Slave], was so gorgeous and gracious throughout all her press. And she was hot. And the industry just follows what’s hot. So I love her for forever—she definitely opened a lot of doors.”

Becoming a series regular was a vital step for Diop because it meant breaking into film was next, “and the next space after that is remaining in film in an impactful way,” she says. (Diop feels “TV is becoming so incredible now—we have Nicole Kidman and De Niro doing television, so that’s changed.”) And though that first series wasn’t what she’d hoped it’d be, canceling just after the first season, she’s since been booked and busy. On TV, she’s starred in Bosch, Titans, 24: Legacy, and Greenleaf. In film, she’s been in Fabrice Du Welz’s Message from the King, starring the late Chadwick Boseman, and Jordan Peele’s horror 2019 film Us, starring Nyong’o.

Working with Peele on Us was particularly memorable for Diop because his overall tone on set became indicative of the kind of inclusive space she wanted to be in as she progressed in Hollywood. “Being in his orbit is amazing,” she says. “He’s one of the most gentle, kind filmmakers and people in this industry that I’ve ever met.” During filming, for example, when the hair and makeup team wanted to put her in a wig, Peele said, “‘Wear your natural hair, that’s what I want,’” she recalls, “and I’m like, I love him.” 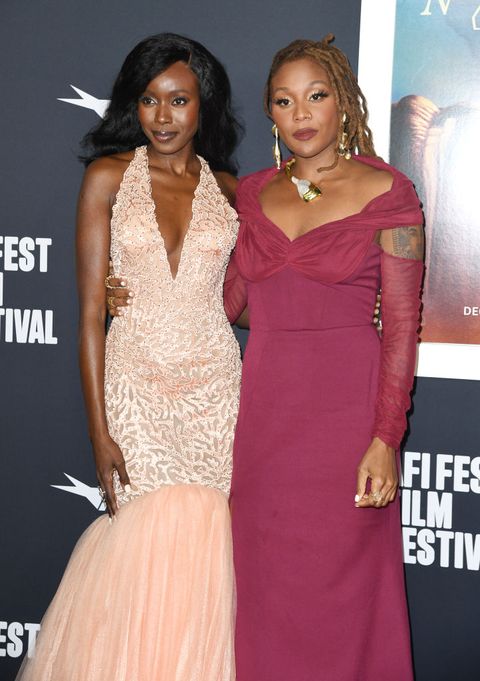 Diop and Jusu at a Nanny screening in Hollywood on Nov. 3.

That same vibe is what drew her to Jusu and Nanny. To be able to walk on set and be authentically herself, surrounded by people who knew its importance, cemented how far such inclusive spaces could breed even more free expression and creativity. That experience has since “spoiled” her because it’s elevated her expectations for the types of roles she’d accept going forward. “I’m in conversation on a few things, but I’ve been very picky,” she says, smiling big. “I don’t want to go back. I want to remain at this level of artistry with filmmakers like Nikyatu.”

Diop hopes audiences walk away from Nanny with a deeper, more empathetic view of the plights of immigrants and those from underprivileged backgrounds who work invisible jobs to make life happen for their families. The film is also a love letter, she says, to “immigrants and people working in these positions to feel seen through Aisha’s character.”

Nanny is now showing in theaters and begins streaming on Prime Video Dec. 16.

Rita Omokha is a freelance writer based in New York who writes about culture, news, and politics.