On Friday night, news broke that Olivia Wilde and Harry Styles were on a break after nearly two years of dating. Over the weekend, sources spoke to more outlets about what happened behind the scenes…and when the split really took place. While Wilde and Styles were photographed out together a week ago, they privately decided to put a pause on their romance weeks ago, one source told Entertainment Tonight.

“They made the decision to call it quits a few weeks ago but they really do love spending time together,” the source said. “He’s gearing up for the international leg of his tour next week, so this was a fitting time to go their separate ways.”

The source said that while they worked on Don’t Worry Darling, it was easier for them to spend time together and sustain their “strong bond.” But after, the distance caused by their different family lives and careers (Wilde’s in film and Styles’ primarily in music with his ongoing tour) made it harder for them to keep going as a couple. 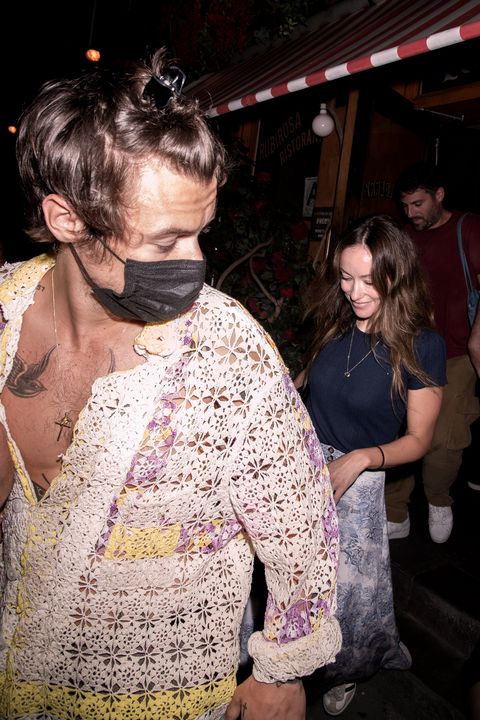 Harry Styles and Olivia Wilde In New York on August 18, 2022

The source told Entertainment Tonight that the two have “no hard feelings” and intend to remain friends.

A source told Page Six similarly, indicating it was a mutual separation. “There is no bad blood between them. Harry didn’t dump Olivia, or vice versa,” the source said. “This is the longest relationship Harry’s ever had, so clearly they have a special bond.” That source reiterated that this is a break and not necessarily the permanent end.

“They’re on a break,” the source said. “It’s impossible to have a relationship when he’s in every continent next year and Olivia has her job and her kids [Otis, 8, and Daisy, 6, with her ex Jason Sudeikis]. This is the right thing for both of them.” The source noted of last week’s Wilde-Styles sighting, “they’re friends, you’ll still see them together.”

People broke the news of the split Friday, and its source stressed they were on good terms. “He’s still touring and is now going abroad,” a source told the outlet of the reasoning. “She is focusing on her kids and her work in L.A. It’s a very amicable decision. They’re still very close friends.”

A friend added, “Right now, they have different priorities that are keeping them apart.”

Alyssa Bailey is the senior news and strategy editor at ELLE.com, where she oversees coverage of celebrities and royals (particularly Meghan Markle and Kate Middleton). She previously held positions at InStyle and Cosmopolitan. When she’s not working, she loves running around Central Park, making people take #ootd pics of her, and exploring New York City.